Lisa Finnie, a frequent HUUT guest and the scholarly host of “The Dylan Hours” (broadcast worldwide via KCSN here in Los Angeles) is also the proud mother of 4-year-old Estefania, for whom she wrote a lovely lockdown lullaby, “Away from Home for the Holidays.”

Finnie assembled a team of L.A. roots rock royalty, including John Groover McDuffie, Dylan Thomas, Art Stucco, and John Palmer (each of whom has also played the HUUT), as well as Randy Landas, Bob Gothar, and Richard Guttenberg. Full credits can be found here.

In the song, narrator Finnie and her daughter stow away on Santa’s sleigh and impersonate elves. It’s really a crazy joyride of lawbreaking. If the song were longer, would the pair engage in more crimes?

“I think any crime we we would commit in the North Pole would be for the good of all,” Finnie says.

It’s a jazzy tune that’s not afraid to be wistful. Though Finnie sings it herself, her “chanteur of choice would be Frank Sinatra,” who’d probably consider the Finnies’ trespassing and general scofflaw attitude tame.

For the storybook feel of the video, Finnie enlisted artist Marisol Barrett, 17 and a senior in high school. Finnie art-directed and furnished Barrett with photographs of Estefania’s socially-distanced or Zoom-based visitors.

Among the many friends and family whose images make cameos, two are particularly poignant: the Finnies’ recently-departed Percy (mysterious cat in the window) and multi-instrumentalist Tim Fleming, seen playing standup bass on his own little cloud by the skating pond. Tim passed away in the early days of the pandemic, but played with many local and national bands before that, including on our stage.

Asked if Fleming’s presence at the North Pole meant Santa’s lair was really the afterlife, Barrett suggests it’s more of a land of personal freedom.

“Tim hangs out whenever he feels the right vibe, you know?” she says.

And what about the various mortals gathered there?

“You just go to the North Pole when you need it,” she says.

In addition, Shaina Palmer is seen driving a convertible. She taught HUUT viewers how to make cocktails in an early quarantine COVIDeo.

It’s fairly nippy for Los Angeles right now (it might even get down to 45 degrees!) so “Away from Home for the Holidays” feels especially toasty. What would Finnie recommend as an ideal snack pairing for the song?

“A Hot Toddy and toasted pecans,” she says. “Or red wine and bleu cheese with crackers, since Estefania likes the latter.”

Download “Away from Home for the Holidays” on bandcamp (part of the proceeds will be donated to Five Acres, a Los Angeles-based child care organization). 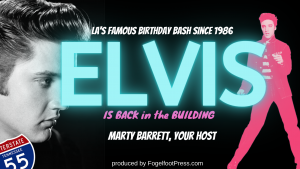 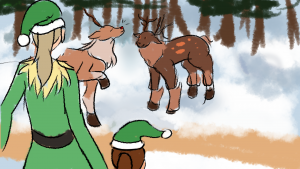 “Away from Home for the Holidays” is a treasure 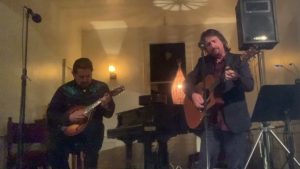 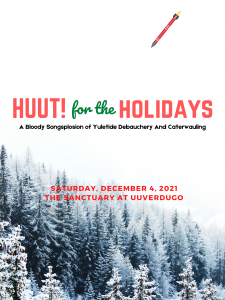